the following is an article written by Willow Wight for the Canadian Museum of Nature.

Non – nacreous pearls produced by the Atlantic Sea Scallop (Placpecten magellanicus) are described. These rare pearls are a byproduct of the commercially important scallop fishery out of Digby, Nova Scotia. White to tan in colour and often baroque, scallop pearls show a silvery sheen in roughly circular patches with a radiating pattern. They are used locally in specially designed 14-karat gold jewellery. SEM images show a structure of very fine, parallel calcite “laths’ that produce the sheen.

The word “Scallop” can bring several images to mind: perhaps first a decorative motif used on the edge of draperies or clothing or in jewellery. The shell of the great scallop (Pecten maximus) was a symbol used by artists throughout the centuries. Greek temples and Roman vases were adorned with shell motifs. A famous example from mediaeval times is the Triton Fountain in Rome. The marble fountain, designed by Bernini in 1642, shows Triton, son of the sea god Poseidon, perched on a large, open scallop shell supported by two dolphins.

Then there are the scallops that are eaten, perhaps prepared as Coquille St. Jacques. The muscle of the scallop mollusc is prepared with a cream sauce and served in the shell. The literal translation for “Coquilles St. Jacques” is “Shell of St. James”. This goes directly back to the Middle Ages, when a scallop shell was the badge worn by pilgrims to the shrine of St. James the Apostle in Campostello, Spain. Scallop shells were plentiful on the northern Spanish beaches.

Pecten is Latin for “comb”, and Pliny, the Roman philosopher, gave scallops the name because their round outline with radiating ribs reminded him of a style of comb used during the Roman Empire. P. maximus is a European species, and shows very well the fluted edges of the “scalloped” shell.

Digby, Nova Scotia, is known as ” The Scallop Capital of the World”. United Empire Loyalists from New York and New England, led by the British Admiral Sir Robert Digby, settled Digby in 1783. Situated on the southwestern shore of Nova Scotia on the Bay of Fundy the town was built as a fishing and lumber center. Digby is the gateway to Nova Scotia for visitors arriving by ferry from Saint John, New Brunswick. The town is famous for the scallops harvested from the local waters, vistas of the Annapolis Basin from the waterfront, and the incredible tides in the harbour (8.5 to 11 meters). Today the main industries of fishing and tourism support a population of about 2500.

Scallops are marine mollusks (phylum Mollusca) of the class Pelecypoda, family Pectinidae. They are bivalves, with two hard shells (or valves) and a soft body. The rounded shells are ridged, with the lower valve usually larger than the upper, and flared “ears” at the hinge. Ridges radiate out along each valve in the shape of a fan. The edges of the shell are sharp and undulating, or scalloped, giving these animals their common name. The valves are opened and closed by a single large muscle, the adductor muscle. This is the “meat”, the only part of the scallop that is usually eaten. Along the edges of the mantle (the outer fold of skin enclosing the interior organs or viscera) are numerous steely-blue, iridescent, primitive eyes; these are sensitive to changes in light intensity, and help to detect predators.

There are 350 species of scallops around the world, but two are important in northeastern North America: the North Atlantic deep-sea scallop (Placopecten magellanicus) and the Atlantic bay scallop( Argopecten irradians).

Genus Placopecten is described as without ribs; with radial striae; right valve smoother; ears unequal; valves with slight convexity (Abbott, 1974). The shell is broad, almost circular, and flattened at the hinge; sizes ranges from 12 – 20 cm. The exterior of the shell is rough, yellowish grey to purplish grey or dirty white, while the interior of the shell is flaky white.

Sea scallops occur along the continental shelf of North America from Labrador south of Cape Hatteras, North Carolina. North of Cape Cod, scattered concentrations occur in shallow water, often just below the low tide mark; further south, aggregations are restricted to deeper, cooler, offshore waters. Sea scallops are intolerant of water temperatures above 20-22 degrees C; the southern extremity of their range and their distribution in costal estuaries are related to temperature. Scallop beds sufficiently dense and extensive to support commercial fishing exist from Port au Bay, Newfoundland to the Virginia Capes, generally at depths between 40 and 100 meters. Although individualized movement of scallops within beds is common, there are no directed population movements or seasonal migrations. At eight years of age the shell height is approximately 13 cm with 11 “meats” /lb. In commercial catches, the scallop shells are 15-20 cm in diameter.

Scallops are Nova Scotia’s most valuable seafood catch and Digby is the home of the world’s largest inshore scallop fleet. There are two main types on the Atlantic coasts: the smaller bay scallop and the commercially important offshore sea scallop.

The inshore fishery is carried out in the Gulf of St. Lawrence and the Bay of Fundy off Digby. The offshore fishery occurs off the southwestern tip of Nova Scotia. Scallops are harvested by specially rigged boats called “draggers” which tow drags equipped with large wire-mesh bags along the ocean bottom. Various types of gear are used, with the “Digby gear” being the most common in the Digby region. Nine metal cages are ganged together so that they can all be dumped at once onto the boat. There are often many empty shells or “clappers” and other debris. After the drag has been reset, the scallops are opened by hand using a shucking knife. No method of mechanically shucking a scallop has been successfully devised. The shells and viscera are discarded at sea.

A scallop is shucked by first running a knife around between the shells, cutting through the adductor muscle, and flipping off the flat shell. The knife is then run under the edge of the viscera, which are pulled up and away, leaving the adductor muscle attached to the lower shell. The scallop muscle (the “meat”) is cut off and placed into pails for processing.

The fishing fleet usually returns home after five days at sea when they have sufficient catch. The scallop fishing season runs all year round, but regulations dictate which areas are open to specific times of the year. Certain areas appear to produce a larger number of scallops with pearls—one bed near the north shore of the Annapolis Basin is the best in the Basin, and area 29 in the Atlantic off the southeast coast of Nova Scotia has been prolific recently. Areas where there happen to be more parasites to infect the scallops or inorganic tissue irritants would likely produce more pearls.(A. Martel, pers. Comm.., 2003;S.E. McGladdery, pers. Comm., 2004).

Scallop pearls have been found casually for years by fishermen, but the shucking process is so fast that any pearls on the shell or within the mantle are not likely seen before shells and viscera are thrown overboard. The shucking process must be quick— a matter of seconds only—because the volume and quality of the meat are of prime importance.

Information from a mollusc expert at the Department of Fisheries and Oceans indicates that pearls can form within the scallop’s body or between the mantle and the shell. The pearls are usually irregular and small, only 1-2 mm, although some reach 5-6 mm in older animals. Larger pearls are very rare. Only 1-5% of scallops produce pearls. (S.E. McGladdery, pers. Comm.. 2003).

The Scallop pearls have a silvery sheen, and some of the most attractive specimens are used for jewellery. Craig Fancy of Fancy Jewellers in Annapolis Royal brought the existence of scallop pearls to the author’s attention in 2001. The first specimens submitted for study ranged from tiny to 10mm in length. The pearls were mostly off-white to pale tan in colour, and baroque in shape—definitely irregular, perhaps even “lumpy”. As might be expected, some showed a much more attractive sheen than others. Some of the pearls were multiples.

Craig Fancy has been making jewellery using scallop pearls since about 1989, when a fisherman brought in some scallop pearls and asked him to set them in a pendant for his wife. Over the next six to eight years, he set many different shapes and sizes of scallop pearls in custom- made mountings for customers. In the 1990s, he began to design pieces of jewellery that were attractive and affordable for the local and tourist markets. These are now sold at the family jewellery stores in Annapolis Royal and Digby.

A visit to Fancy Jewelelrs in Annpapolis Royal, Nova Scotia permitted me to see and to photograph various pieces of jewellery made by Craig Fancy. Craig has developed several designs for earrings, pendants and rings in 14K gold that suit the delicate nature of the pearls very well. People bring the pearls in all kinds of containers: a 35-mm film canister holds about 200 pieces depending on the size. Of these there may be about ten pieces (round and half round) that have near perfect symmetry and the best colour. Of the rest, there will be about 30 pieces that have good colour and some symmetry—-these can be ground or polished to make setting easier. The rest are too small, misshapen, or an undesirable brown colour.

The scallop pearls are usually cleaned in an ultrasonic cleaner with a mild detergent, and then buffed lightly and cleaned. There is no other treatment—these are natural gems.

Most of the pearls used in jewellery are almost spherical, white to light tan in colour and about 3-5 mm in diameter. Pearls of >5 mm in diameter and of near spherical shape are not at all common. Three exceptional specimens were on hand at the time of our visit. Two were “button” shape, round, but flattened on one side. The tan one measured 9 x 10 mm d. x 9 mm high; the white one measured 12.2 mm d. x 8.5 mm high. The largest baroque pearl measured 20x9x8 mm. Over the years, Craig’s biggest and best specimens were four large rounds of 8-11 mm that he set in cage-style pendants. He has also seen one that resembled a .44 calibre bullet.

The chances of the Digby scallop pearl becoming a major new industry in Canada are remote.Although scallop pearls have the advantage of being a natural gem in a world where consumers must consider country of origin, treatments, and disclosure , the supply is small and unreliable. For the small business now in place , it is likely that the market can be expanded somewhat, with more knowledge and awareness of the scallop pearl. Craig Fancy is doing well to concentrate on a line of moderately priced jewellery of good quality. A scallop pearl makes a wonderful and appropriate souvenir of the Maritimes. Digby scallops pearls are certainly a worthy addition to the list of Canadian Gemstones. 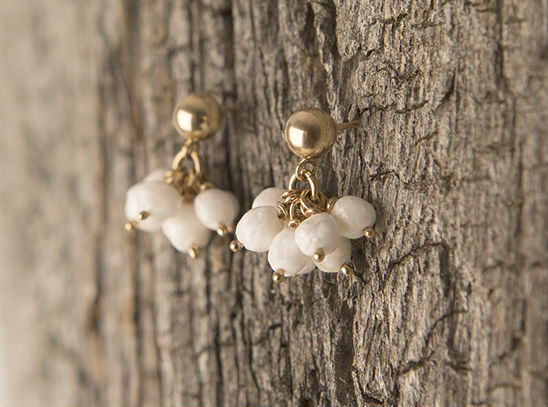